If you struggle with mood, metabolism, MTHFR or a myriad of health conditions, then your methylation might be crying out for help.

Or perhaps you already know your methylation system needs support, but have found that you’re just too sensitive for most methylation support supplements.

Fret not friend, we have your methylation solution!

First things first — let’s wrap our minds around what methylation is and why it’s so important.

Many people haven’t even heard the word methylation, yet it’s one of the most important biochemical processes happening continually in nearly every one of our cells..

Down at the cellular level, methylation is simply the addition of a tiny molecule called a methyl group (CH3) to another molecule which ‘activates’ the receiving molecule. The body’s main methyl donor is SAMe (S-adenosylmethionine). SAMe travels around the body, giving methyl groups to molecules in need. Once activated, these molecules can now perform their jobs of keeping our body systems running smoothly.

A common example of methylation is the addition of a methyl group to folate, which converts it into the active form of folate known as 5-MTHF (methylfolate). Unlike the man-made form of folic acid found in processed foods and cheap supplements, the body can directly use methylfolate in all of the important cellular processes where folate is required. People with the MTHFR genetic mutation have difficulties activating folate due to a genetic mutation that affects the ability of the MTHFR enzyme to add a methyl group to folate. Thus, people with MTHFR gene mutations often find they feel much better when they supplement with methylfolate which helps them maintain folate status and proper methylation.*

Another example of methylation is the addition of a methyl group to homocysteine (a marker of inflammation and cardiovascular disease) to convert it into methionine, a harmless amino acid. Moreover, the addition and removal of methyl groups to and from DNA are responsible for turning genes on and off. As you can see, we need our methylation firing on all cylinders for our bodies to function optimally!

Why is Methylation Important?

Proper methylation is essential for life and is involved in many functions in the body such as:

How to Optimize Your Methylation

We should be doing everything we can to optimize our body’s ability to effectively methylate because it’s such a critical process. It’s not that one can simply do it once and be done. Methylation must be continually maintained throughout life,. Problems start arising when methylation is not optimized, meaning, it’s happening slower than it should be (or the opposite: it’s happening too fast!). In general, the methylation cycle slows down when it doesn’t have enough methyl-supportive nutrients and speeds up when it has too many. 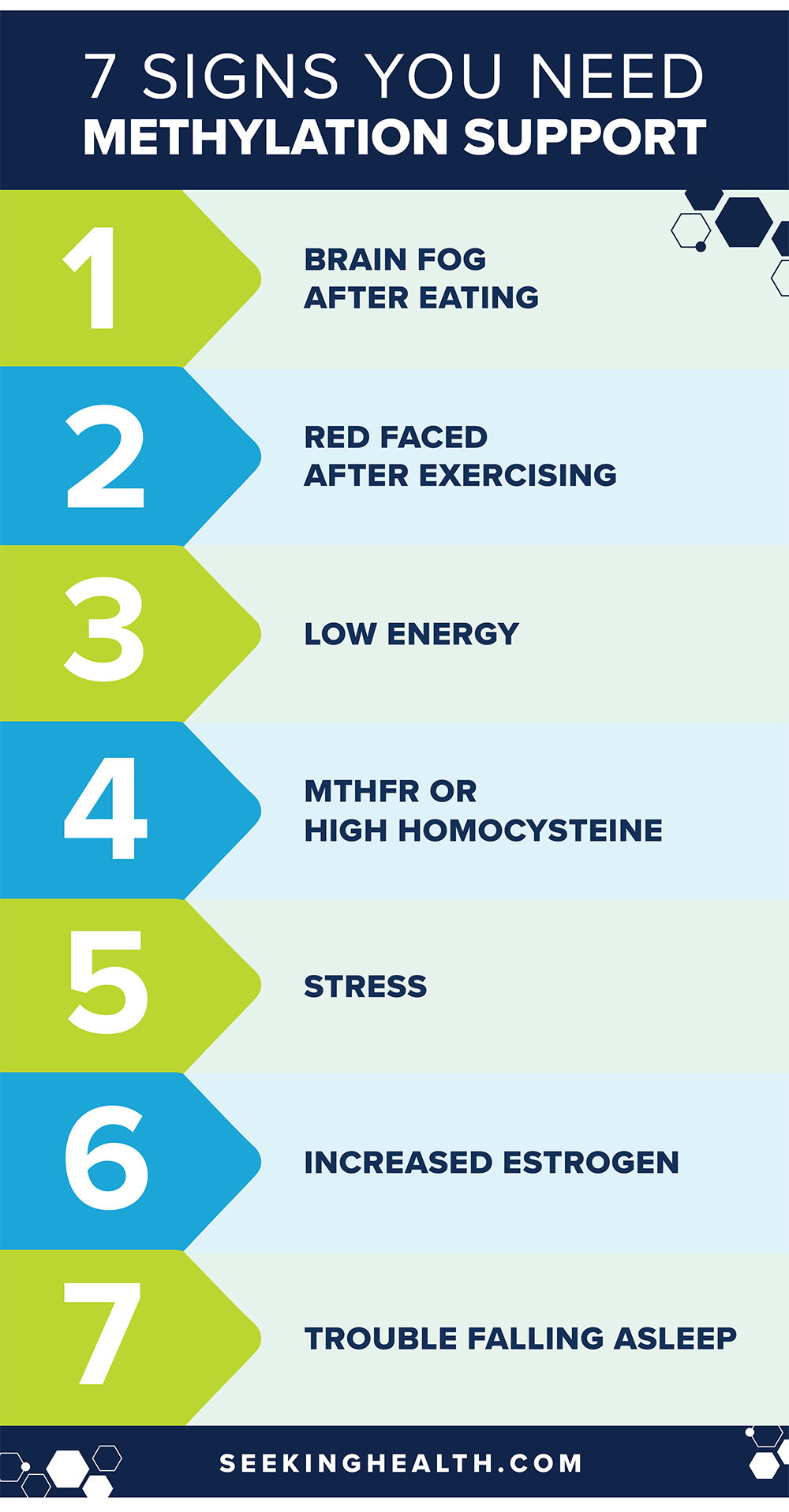 Methylation is also quite sensitive to free radicals, specifically, hydrogen peroxide. Hydrogen peroxide is generated by the body during times of infections, mental stress (anxiety), physical stress (overtraining, obesity) and detoxification (via Cytochrome P450 enzymes). During these times, our bodies require even more methylation support.

Here are 7 signs that you may need to up your methylation game:

The Problem with Methyl Support

Unfortunately, when people start taking methylation support, many discover that the majority of the supplements on the market are far too potent.

Common symptoms of too much methylation include:

While having a potent methylation support supplement is great for some, it isn’t the right fit for everyone and can be too strong for many.

The problem is that most methylation supplements:

While folate, vitamin B12, and betaine are essential for methylation, they are not the only nutrients needed. And just because you have sufficient folate and vitamin B12, it doesn’t mean your methylation cycle is functioning well!

If you know you need some hefty methylation support, try  HomocysteX Plus which contain active forms of four essential B-vitamins to synergistically support methylation and normal homocysteine metabolism.*

If you’re wanting to gently optimize your methylation as you are too sensitive to most methylation support supplements, consider Methylate. Methylate was created by Dr. Ben Lynch to address the need for an easy-to-take vitamin that supports methylation quickly, comprehensively, and gently. This lower dose of methylation support is the solution for those of you who are sensitive to the higher doses found in most supplements. This gentle dosage allows you to optimize rather than overwhelm your methylation cycle. By supporting methylation gently, common unpleasant side effects of taking methylation support may be lessened or prevented completely.*

Methylate come in an easy-to-take and tasty chewable tablet. We’ve included active forms of folate, vitamin B12 and nine other targeted nutrients to help support and optimize healthy methylation processes throughout the body.

If you know your methylation system needs support, focus on eating a healthy diet that includes an abundance of methyl donors. Aim for getting between 1/2 and 1 gram of protein per pound of bodyweight to ensure you’re getting enough methionine and the other amino acids and nutrients needed to recycle homocysteine. Include pastured organ meats a few times a week for folate and trace minerals. Consume a plethora and a variety of different vegetables, including dark green leafy veggies in the mix for B’s and other vitamins. Eating whole foods will help you to meet your body’s needs for many of the nutrients required for methylation.

If you need a bit more methylation support, consider Methylate for that extra edge without putting you over the edge!